During the stride, a hitter must stay "closed". Keeping your front knee cocked during the swing will accomplish this.

When your front foot hits the ground during your swing, your body must still be closed. By that I mean your hips and front foot(toes) should still be facing home plate, not open facing the pitcher.

The best way to make sure of this is to cock your front knee before your stride. This will bring your weight back where it should be. Then as you stride, keep that front knee cocked. This will keep everything closed and ready to hit as your front foot touches the ground. 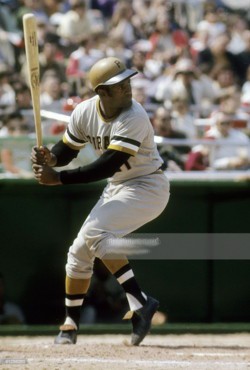 Roberto Clemente's weight is clearly back as he cocks his front knee. His hips are closed. He is like a compressed spring. 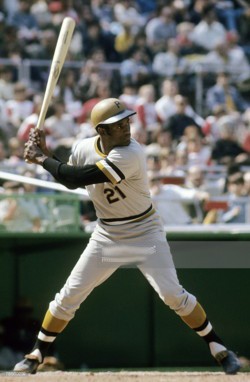 Now look at Roberto after his front foot has landed. He is still closed. His hips and front foot have not opened toward the pitcher and his front knee is still cocked. This keeps everything is in position to hit the ball hard. He has not squandered his power. 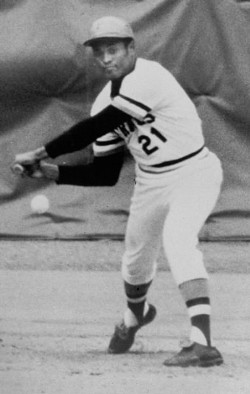 One more photo of Clemente. Notice that as he begins his swing, his front foot(toes) are still pointing toward home plate. Only now do his hips begin to open, bringing his bat through the strike zone. A very powerful position. 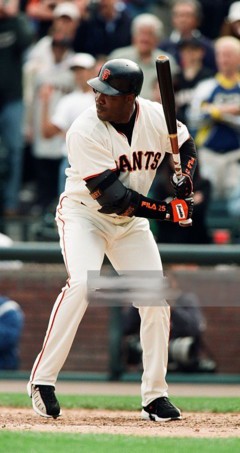 Here again, Barry Bonds has cocked his front knee putting his weight back and cocking and coiling his body. 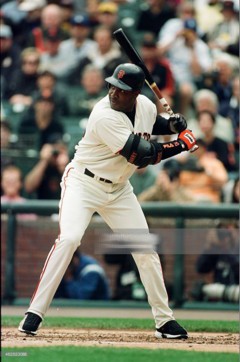 As Barry's front foot lands during his stride, his weight is still back. His hips and front foot are still square to home plate and his knee is still cocked. Nothing has "opened" toward the pitcher. Perfect position to hit from. 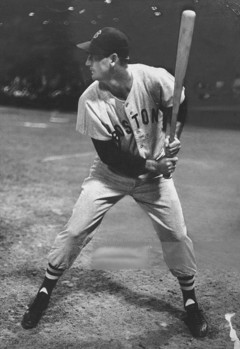 Ted Williams cocked his front knee, too. As his front foot landed, he was square to home plate. Nothing has opened. All his power is saved for hitting the ball. 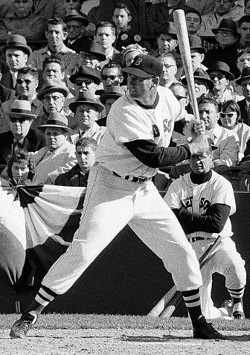 One other thing all three of these hitters had in common. They all had a hitch in their swing. I believe that this helps overcome inertia and makes it easier to get the bat moving, rather than swinging from a dead stand still.

But back to cocking that front knee. If, during your swing, you open everything toward the pitcher before you actually swing the bat, you will lose power. Opening your hips, front knee and foot will cause you to "drag" your bat through the strike zone. By keeping everything closed until your front foot hits the ground, everything is in the proper position. All of your power is saved for the actual swing.

Remember, you stride, then swing. It is two distinct movements. If you stride and swing at the same time, your body will open too soon and cause enormous power loss.

Babe Ruth cocked his front knee and had that same little hitch. 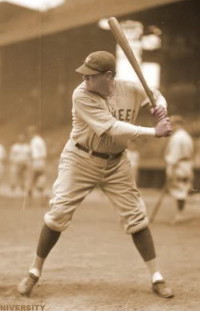 As his front foot landed, he was still "closed". And nobody had more power than the Bambino.

So, the next time you take batting practice or hit off a tee, practice cocking that front knee. Keep it cocked until your front foot hits the ground. Stride then swing. You will be in a very powerful hitting position.