After high school and American Legion baseball, I was good enough to sign a Minor League contract with the Philadelphia Phillies. I still play in the Men's Senior Baseball League (MSBL). I have had the privilege of having some great hitting coaches. Through my baseball experiences I have been a very successful hitter.

I say all this because in all my years in baseball, I never, ever heard anything about my dominant eye as it relates to hitting a baseball.

A few months ago, my good friend Dave Morris called me. We began to talk about hitting like we always do. Dave is and has always been an excellent hitter and also plays in the MSBL. 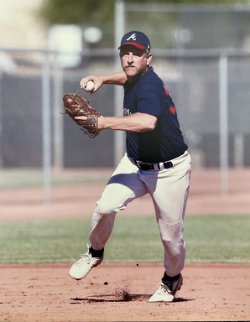 We got together and again talked about hitting. Dave asked me which eye is my dominant eye. I had no idea, nor did I understand what that had to do with hitting. Or anything else in sports for that matter.

He told me about the work he had been doing with dominant eye training, showed me how to determine my dominant eye and why it matters so much in hitting.

I have always been interested in anything that will make me a better hitter. Even at my age. There are many players in the MSBL who are happy just to be playing and don't really have the need or desire to continually improve. And that's ok.

Baseball at our age (60's) does not have to be a life consuming obsession. But for me and Dave Morris, it is. Baseball at any level is much more enjoyable and fulfilling when you are successful. If you are willing to put in the time to get better.

As we talked about the whole dominant eye thing, I began to realize why some of the negative things would happen to me from time to time during a few at bats.

For example, I told Dave that now and then I would have a great swing at a good pitch and "just miss it". Resulting in a fly ball instead of a line drive.

We discussed what the problem could be during those at bats, based on my dominant eye, and talked about possible, slight adjustments to my batting stance and approach to hitting.

It was like a light went on in my head. Why, in 50 plus years playing baseball, had nobody ever mentioned this. Evidently, it's because nobody knows.

We also talked about the mechanics of a good swing and how some things we were taught as young hitters are actually wrong.

Dave Morris has been working in the field of vision and eye dominance for nearly 20 years. He applies his findings to all facets of baseball including fielding, throwing and pitching. The same "dominant eye rules" apply to all sports as well as everyday life. His findings are simple and make complete sense.

My interest is hitting a baseball. But if you would like to become a better basketball or football player, dart thrower, pool shooter or anything else in sports, the same principles apply.

Coach Dave Morris has put his dominant eye principles together on his website, Track Vision. For much more information on the science of eye dominance as it pertains to sports, and some cool tools to help with training, click on the Track Vision Logo.