I've written some baseball articles I hope you'll enjoy. All of them are related to the game.

I'll be adding to this page regularly so bookmark us right now so you won't miss anything.

"How Your Dominant Eye Can Make You A Better Hitter".

"Don't Drop Your Back Shoulder".

"Swing Down At The Ball".

"Drive The Knob Of The Bat To The Ball".

"No Hitch, Keep The Bat Still".

*How To Hit The Curve Ball.

"Stop Worrying About The Breaking Pitch".

*Oh, How The Game Has Changed.

Our great game isn't what it used to be.

*History Of The Baseball Bat

From the big, flat sided bat to the sleek models of today. A history of the bat.

Sixty Seven years behind the microphone with the Dodgers.

Let's look at some strikeout records and why they are on the rise.

If you're not a kid anymore and would love to play baseball again, check this out!

When will the owners learn?

Should we now embrace A Rod Dispite The PEDs?

Have you ever considered buying sports memorabilia as an investement?

If you are one of the serious collectors of baseball memorabilia, please consider my hand painted baseballs.

Here are few things that make Baseball unique compared to other sports.

In 1975 I played for the Rocky Mount Phillies in the minor leagues. Here's a great article about our championship team and me.

The public address voice of the Phillies for over 40 years!

Based on the numbers, who was the best player during the decade of the 1950s?

Based on the numbers, who was the best player during the decade of the 1960s?

The Dallas Green I Remember.

Why are the great old teams not so great anymore?

Should players that used steroids be in the Hall of Fame?

Do we need a play clock in baseball?

No other sport has it's own language like baseball does.

There are only seven Latin born Hall Of Famers

*Greatest Hitter Of All Time

A look at some of Baseball's best and who might be the greatest.

When Will It End!

Some great tips and strategies for coaching your Little League team.

Check out some in-expensive baseball hitting drills you can do on your own that will dramatically improve your hitting skills.

Here's a little history about the Pittsburgh Pirates baseball club.

*Why The Hall Not?

Let's take a look at some players that should be in Baseball's Hall of Fame and why.

Radio vs TV. Remember those great broadcasters that seemed to be there forever?

Colorful and wildly popular broadcaster for the St. Louis Cardinals and Chicago Cubs

Here's a look at how the whole Free Agency thing got started.

Do you know who the Highlanders, the Alleghenies and the Bridegrooms were. Find out who these teams became and more.

How to tell if you have an obsession with baseball.

Some of the funniest and most interesting things Major Leaguers have said.

An extensive list of Baseball Nicknames past and present.

Some facts about the Cy Young Award that you might not have known.

A fascinating look back at some old ball parks that are now just memories.

We're going to take a look back at how baseball got started and just who had the most to do with it.

Baseball salaries and payrolls have definitely changed over the years. See how the changes have affected the game.

Some interesting baseball facts that you may not have known.

The man we always believed invented baseball actually had very little to do with the game.

A discussion about how to get Major League autographs by mail.

How we played the game when we were kids.

A history of our all time favorite ball park snack.

Find out how helmets made their way into baseball. 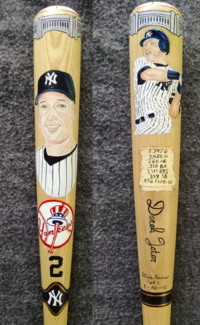 Check Out My Hand Painted Bats

Back To My Home Page