After high school and American Legion baseball I had the opportunity of a lifetime to play minor league baseball in the Philadelphia Phillies organization. 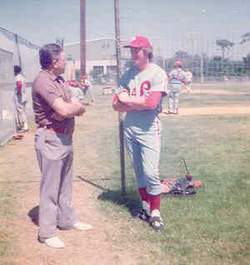 After that, I played here in Pennsylvania in the Blue Mountain League. This is a league that has no age limits or requirements. I played in this league for several years, but now I was married and had kids so the time commitment was too much. Two or three games a week.

16 years ago, a guy named Dick Prue called me and said he was putting together a new team in the MSBL(Men's Senior Baseball League). I had never heard of this league. They have a few different age divisions and he was starting an over 45 team. All players must be at least 45 years of age to play.

I was 50 years old at that time and an old knee injury had taken it's toll. Plus I had my family and job to think about. What if I got hurt? So I said no. Mr. Prue said that if I change my mind, I should let him know.

I talked to my wife about it but decided it was best not to play. So, for the next two weeks I drove my wife crazy talking about baseball and how I wished I could play. I started to swing a bat every day too. Finally she said,"why don't you call that guy and tell him you will play?"

I will be forever grateful to my wife, Robin, for that. I called Dick and accepted his offer to play. Let me tell you, it's one of the best decisions I ever made.

I'm 65 years old now and if someone would have told me 40 years ago that I'd still be playing baseball at age 65, I'd have thought they were crazy! 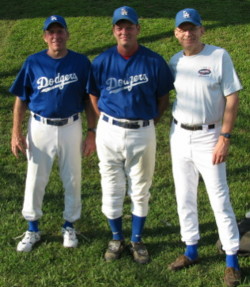 Let me tell you another thing. This is the most fun I have ever had playing baseball. I play center field for our Emmaus Dodgers. Although the knee doesn't cooperate anymore I think I do a pretty good job out there. Altough now a days most of my time is spent playing first base.

The MSBL is good old country hardball. We play nine inning games once a week, on either Saturday or Sunday. And we use wood bats! I love it.

All the guys on our Dodger team take this baseball playing seriously, but we also realize that we are way past our prime playing years. If one of us strikes out or makes an error, nobody says a word because we all realize that it could be us next.

My wife always tells me that I take it way to seriously. I practice all winter, which keeps me in decent shape and last season I actually led the league in hits. 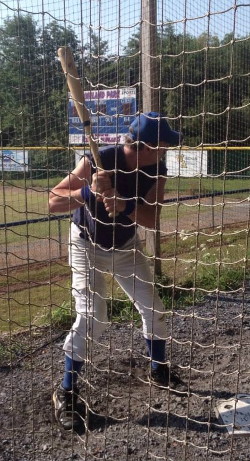 That's me taking batting practice before a game last season

The schedule consists of 18 games. Like I said, once a week, although this season we have a few double headers scheduled.

The competition is surprisingly good given the fact that we are not kids anymore. Although playing baseball makes us feel young again. 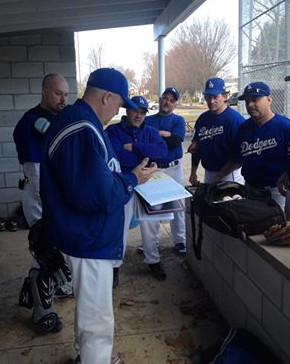 Manager Dick Prue reading the lineup before a game

One problem we have every season though, is getting players. At our age it's sometimes difficult to convince guys to come and play. Especially if they haven't played since they were teenagers. But once they come and see how great it is, they usually get hooked.

Everyone get's a chance to play. We have 15 players on our roster (although sometimes we only have 9 or 10 players at a game) and there is "free substitution" and everyone bats in the lineup.

The Men's Senior Baseball League currently has several age divisions, including the Over 55 division in which my Dodgers now play in.

If you used to play baseball a long time ago and would like to play again, just for the shear fun of it, please consider the MSBL. There are a few fees to pay, like league fee and team fee which covers the cost of baseballs and two umpires for each game. But it's worth it!

If baseball is in your blood, you are over 55 years old and would like to play baseball for our Emmuas, PA Dodgers, please contact me or the Men's Senior Baseball League.

You don't have to be Babe Ruth or Willie Mays to play. The fact that you love baseball and want to have a great time playing again is good enough for us.

One of my team mates always says that discovering the MSBL is like finding the fountain of youth.

Our Dodgers team is located in Emmaus, Pennsylvania. Just outside of Allentown and about an hour north of Philadelphia. 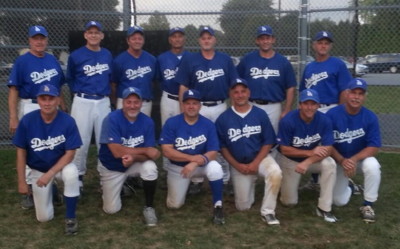 Back To Legends Blog