There is nothing I’d rather do than hit a baseball. When I was a kid, my Dad was the pitcher and I was the hitter.

Anyway, I’d like to talk about something that has bothered me as a baseball player, specifically a hitter, for a long time. And that is some of the things that we were taught about hitting as kids and even older players, that I now realize are completely false.

As a former minor league player, even some things that I was taught about hitting, I now believe are wrong. And I hope to prove it.

A few years ago I helped coach a thirteen and fourteen year old youth team. During batting practice one of the other coaches told one of our kids to stop dropping his back shoulder. The result was a rather awkward, choppy swing.

This is a sketch I did of who I consider the best hitter in baseball today. Mike Trout. Look at his shoulders as he makes contact. Pretty obvious to me that he IS dropping his back shoulder as he swings. What causes this?

The horizontal line represents level shoulders as a starting point in the stance. In order to keep your back shoulder from dropping, the hitter would have to open, or rotate, his front shoulder in the direction of the third base coach (First base coach for a left handed hitter).

This causes the arms and bat to cast out over the plate during the swing, which will cause the top hand to “roll over” too soon. The resulting hit would most likely be a ground ball to the hitter’s pull side. Short stop or third base for this right hander. 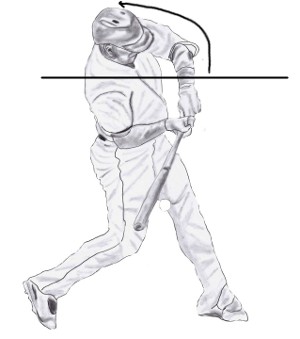 Here’s what should happen during a good swing. As the hips begin to open toward the pitcher, the front shoulder does not rotate toward the base coach. The front shoulder moves up and back. This accomplishes several things you must do to be a good hitter.

First, this up and back movement allows your hands to stay inside the flight path of the baseball which is an absolute must!

It also makes it much easier to have the palm up palm down at contact. At contact your top hand must be palm up, bottom hand palm down.

This shoulder movement will also keep your head down, on the ball. I have heard coaches tell hitters a million times to stop pulling their head out. But if you don’t tell a hitter how to stop, they probably won’t. This is how to do it.

There’s another thing this shoulder movement will produce. It will give you that rear “tilt” at contact that every great hitter has. As your bottom half is moving forward, your top half is actually moving backward. This creates torque. Like shooting a rubber band. “Pulling" in two different directions at the same time. This also creates incredible bat speed. 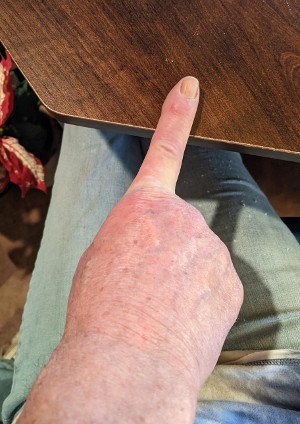 Try this test. Extend the index finger on your right hand. Now tap it as hard as you can against a table top. 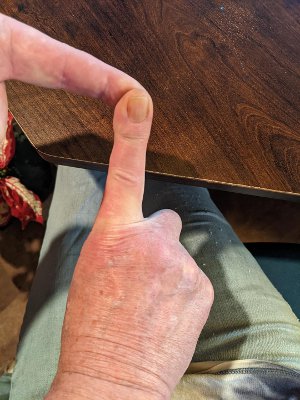 It’s the same with hitting. Your upper and lower muscles stretching in opposite directions creates a rubber band like swing. It puts a lot more “snap” in your swing. This is a result of your front shoulder moving up and back during your swing.

We have all heard as hitters that you should have a level swing, or even worse, to swing down at the ball.

Let’s look at Mike Trout again. The barrel of the bat must be below your hands at contact. I challenge anyone to show me how you can swing down at the ball and keep your hands above the barrel. Try it. It’s not possible.

The correct swing path is slightly up. Here’s why. 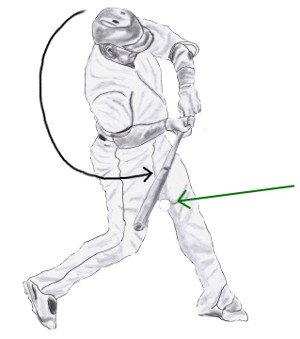 The pitcher is throwing from a mound that is higher than the hitter. Plus, most times his arm is higher still. He is actually throwing down hill. Therefore, the plane of the baseball is coming down toward the hitter. The red arrow represents this path.

Trout's swing is not down. He brings his bat around him and upward into the ball. 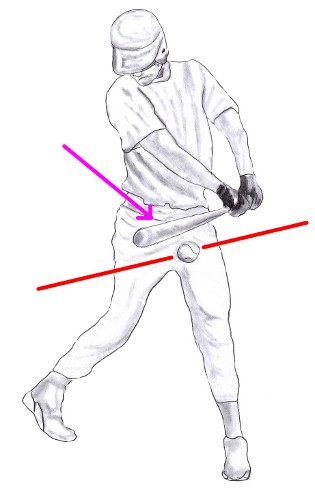 This choppy, swing is the result of swinging down on the ball.

This hitter’s weight is clearly forward too much. And by swinging down, your top hand will roll over way to soon. That’s a ground ball to your pull side.

There is no way you can keep your top hand palm up with this swing.

Drive The Knob Of The Bat To The Ball:

I’ve heard this suggestion too. And I think it’s wrong.

I recently saw an article promoting the theory of driving the bat knob to the ball. They used Barry Bonds as an example. However, if you watch Bonds’ swing in slow motion you will see that he is not doing that. 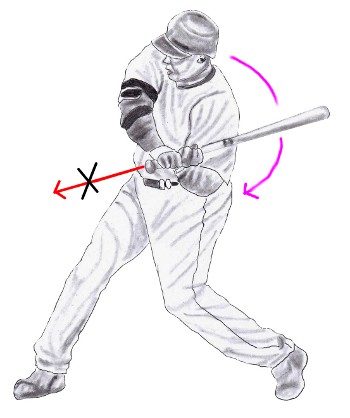 Let’s look at Bonds’ swing a milli-second later. The knob isn’t driving to the ball. It’s turning up as the barrel comes around him. So Bonds is NOT driving the knob to the ball. He is in the process of turning the knob up. 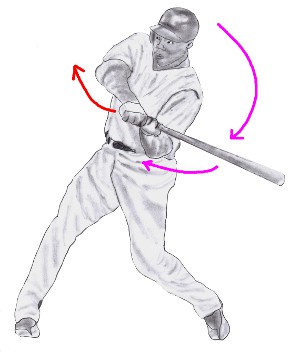 As Bonds brings the bat head around him the barrel drops below his hands. A slightly upward swing. Now it will stay on plane with the ball much longer.

Isaac Newton said, “ The first law of motion, also known as the law of inertia , states that an object at rest will stay at rest and an object in motion will stay in motion with the same speed and direction unless acted upon by unbalanced force.”

Hitters of the past might not have known about Newton, but they sure knew about inertia. When I was in the minor leagues, I had a “hitch” in my swing. I dropped my hands a little and tipped my bat toward home plate before I swung.

My batting coach told me that I couldn’t hit with a “hitch”. Well, let’s look at that. I have studied this for many years, and as far as I’m concerned, a hitch will make you a better hitter. 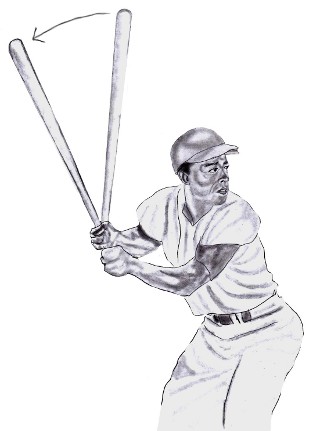 This is my drawing of Henry Aaron. He started with his bat vertical. As he began his swing, he dropped his bat toward home plate at approximately a 45 degree angle. Then brought it back up before the swing. Some call this a hitch, some call it bat tipping.

As a right hand hitter, in your stance, your belt buckle is facing the left hander’s batter’s box. Think of a clock in that batter’s box. 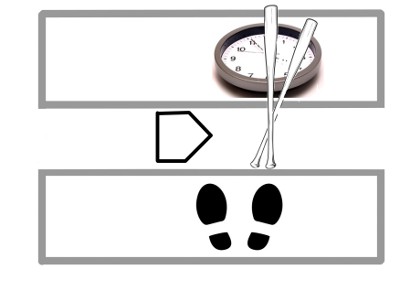 To be quick with the bat a hitter must be loose. Tense muscles fire slower than relaxed muscles. Muscles that are moving tend to be more relaxed. By tipping your bat, you will be looser because the bat is already moving. This overcomes inertia and the bat will fire much quicker.

This creates a “buggy whip” action in your swing.

I read an article recently that explained how this bat tipping action actually un-weights the bat. Which explains how all those old time hitters could use forty ounce bats.

By watching many You Tube videos, I’ve noticed more and more of today’s hitters are doing this. But nearly all great hitters from the past did it. But not all to the same degree. Guys like Mel Ott, Rogers Hornsby, Ty Cobb and Lou Gehrig exaggerated it. They REALLY dropped their hands and tipped the bat.

Babe Ruth, Ted Williams, Stan Musial very obviously did it. With some it was a more subtle movement. 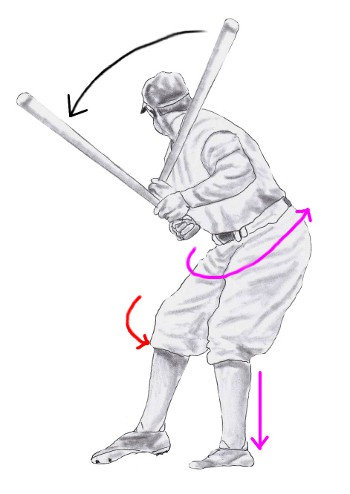 Babe Ruth started with his bat over his back shoulder. He tipped his bat a little more than 45 degrees toward home plate.

Notice. also, that by cocking his front knee, his hips and upper body coil back toward the catcher. His weight is clearly on his back leg during his "load".

As I said, I always had a hitch in my swing but I never realized that I was “tipping” my bat. The reason is because when I was a kid, I idolized Roberto Clemente. I mimicked his swing and he tipped his bat. The last few seasons in our Men’s Senior Baseball League, I’ve been consciously gripping the bat very loosely and tipping my bat. The results have been impressive.

I recommend that you go to you tube and check out slow motion videos of these players from the past. There was a TV show in the 1960’s called Home Run Derby. Henry Aaron was on quite a few of the shows. You can really get a good idea of how he tipped his bat.

I've heard this many times, too. "You have to extend your arms at contact". Let me show you why this is wrong. First let me say that I used to teach this. That is until I realized from watching hundreds of videos of Major League hitters, that they aren't extended at contact. 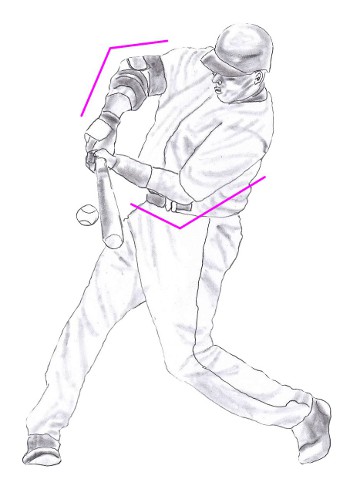 Look where Barry Bonds' arms are at contact. They are NOT extended. Both arms are clearly bent.

Trying to get extended at contact will cause you to cast the bat away from your body. You will not be able to "stay inside" the ball.

Extending your arms too soon will also cause your top hand to roll over too soon resulting in ground balls to your pull side. You will not be able to keep your top hand palm up and your bottom hand palm down at contact.

Here's Mike Trout again. As he begins his swing, his right elbow drops into that slot against his hip. His left shoulder moves up and back. This causes his arms to bend at contact. A swing like this also makes it much easier to "let the ball travel". When you hit the ball deeper in the strike zone, the results are usually much better.